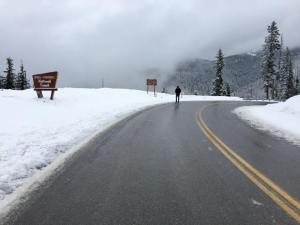 Since my reading the night before at Fact & Fiction was followed by some serious bar-hopping and it being pointed out to me that at midnight, it officially became my birthday, we ended up get a late start to head to Coeur d’Alene for a gig at The Well-Read Moose. But we still were able to take back roads. Cutting north on 93 passing near the Garden of One-thousand Buddhas at Arlee and passing numerous road signs in Salish and Kootenai languages. The languages use characters and symbols far beyond my word processing skills, but their English translations are fantastic: “Place Where You Surround Something” and “Little Valley Behind Hills.”

After a road drink in Thompson Falls, we crossed a mountain pass that threw us back into winter. The Midwesterner in me still has trouble fathoming severe snow and ice conditions in April, but we got lucky and were able to make it through, dropping into Idaho, and eventually into “Heart of the Awl.” Rather than try to tell you about the drive, here’s my birthday poem for this year that I finished a day later in a Spokane bar:

Yesterday, a coyote on the median
testing the limits of mortality
& the physics of steel,
Tomorrow, a dark corner bar in Spokane
with bad music & too many TVs
But today,
as soaring as the Brahms
as delicate as the fog,
to be here with the woman I love
with bellies full of sushi
& the lights of Coeur d’Alene seeping
through the blinds &
painting our bodies in joy