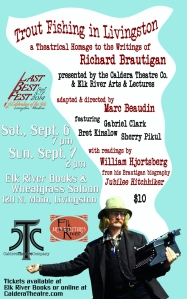 Culled from the fiction and poetry of one of Livingston’s most legendary writers, the play presents excerpts adapted into a satiric and wild journey through Brautigan’s world. The production was adapted and directed by Marc Beaudin, artistic director of the Caldera Theatre Company (CTC), and features performances by Gabriel Clark, Bret Kinslow and Sherry Pikul. Interspersed throughout the play’s nine scenes will be short readings by Brautigan’s close friend and biographer William Hjortsberg, author of Jubilee Hitchiker: The Life and Times of Richard Brautigan.

The text for the production was adapted from Brautigan’s Trout Fishing in America, The Pill Versus the Springhill Mine Disaster, Revenge of the Lawn and The Edna Webster Collection of Undiscovered Writings.

Brautigan lived and wrote off and on in the Livingston area from the beginning of the 1970s until his death in 1984. His writings, which are darkly comical, highly imaginative and often bordering on the surreal, found form in numerous novels, short stories and poems, the most famous being Trout Fishing in America.

The CTC is a local, independent theatre company that seeks to create an environment for the exploration and development of the art of theatre, and to produce theatrical and other creative events that show a commitment to artistic quality and ingenuity. More information can be found at CalderaTheatre.com.

1 Response to Trout Fishing in Livingston