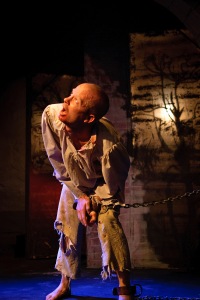 Director’s Note from the Program:

Like Count Dracula himself, the appeal of the Vampire legend seems to be immortal.  Ever since Bram Stoker popularized the eastern European myth with his 1897 novel, we’ve been fascinated by the mysterious stranger who comes in the night.  Each new generation adds its own twist on the motif, and each generation is again mesmerized by the Vampire’s spell.

I think the enduring quality of this myth lies in the gifts that the Vampire offers.  Unlike most monsters and creatures of the night, who merely want to kill and eat us, Dracula brings the boons of immortality, power and sexual abandon – the very things that many of us seek or yearn for through the avenues of religion, money, and lewd entertainment.  But unlike those opiates that make seldom-kept promises, the Vampire fulfills his commitment to us with a sensual bite to the neck.  Yet, the cost is the same: our soul.

This play, true to Stoker’s novel, takes us into the heart of this myth, exploring the complexities and contradictions of good and evil, as well as raising complex questions:  Does society teach morality or demand repression of our natural selves?  Does Dracula, as society’s opposite offer depravity or freedom?  Like all great art, Dietz’s play doesn’t give the answers.  Rather it holds up a mirror and forces us to search for those answers within ourselves.  Hopefully, what we see reflected in that mirror (if anything) doesn’t terrify us … too much.